Joining the “seriously, how often does stuff like this happen?” file.

Answer is with alarming regularity.

No one is safe from traffic violence.

12/17/2021 7:30AM Pedestrian was walking along Cornell near Forest; this is the neighborhood adjoining Kiwanis park in Tempe. This is a residential area, traffic engineers would call Cornell Drive “collector” street.

The driver, of course, fled the scene. He was later arrested for susp of hit-and-run, and manslaughter and a few other things. END_OF_DOCUMENT_TOKEN_TO_BE_REPLACED

11/10/2021 ~ 10am. What was the driver doing to cause such an obvious and fatal mistake? Authorities have not yet said or speculated. The driver’s name has not been released. Scottsdale PD is investigating. McDowell Road near 87th St.

As I’ve noted before, police work can be dangerous, and traffic is a leading cause of death for law enforcement officers.

This is a pedestrian fatality. END_OF_DOCUMENT_TOKEN_TO_BE_REPLACED

police-speeding without the benefit of lights or sirens, seems to be a routine thing. In this incident from a several years ago:

…striking and killing a drunk pedestrian near Baseline and Rural roads who was (I presume) “jaywalking”. The incident occurred in 2005, but a wrongful death lawsuit wasn’t settled until 2010.

END_OF_DOCUMENT_TOKEN_TO_BE_REPLACED

Three years later, a driver was arrest on susp of 2nd degree murder (and presumably, leaving the scene of a fatal). There is much that is not said in the news article. 2nd degree murder indicates police believe they can prove the driver not only caused the crash that resulted (it was in a crosswalk, so that’s probably covered), but that the driver was doing something particularly reckless at the time — normally the only thing that will ever rise to that level is intoxication. The article says nothing about why he was charged that way.

This wouldn’t be the first time diligent policework led to a driver’s hit-and-run arrest much later, see e.g. hit-and-run-and-good-old-fashioned-policework/

END_OF_DOCUMENT_TOKEN_TO_BE_REPLACED 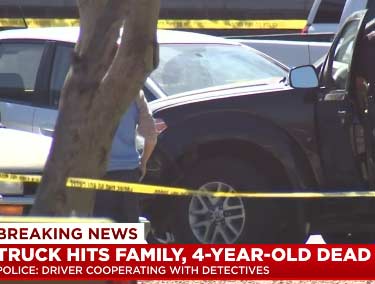 3/3/2021, morning. Ug. Driver wipes out a family walking on a sidewalk within a Walmart parking lot.

“the driver could face a reckless driving charge”. Don’t count on it. Authorities have already said impairment is not involved, more than likely this will be seen as the usual “just an accident”. END_OF_DOCUMENT_TOKEN_TO_BE_REPLACED

12/17/2020, Thursday night (time not specified; also victim’s name not released). The driver of a Ford F-150 left the road near West Grant & North Oracle crashing thru a fence into a backyard striking and killing a person there, then ran away. Police think the driver may have been drunk.

END_OF_DOCUMENT_TOKEN_TO_BE_REPLACED

Jerry Sanstead Jr, the driver in this Jan ’19 incident was finally indicted on manslaughter in Dec 2020. That it takes this long to even bring charges speaks volumes about the sorry state of holding drivers responsible for their actions behind the wheel:

DPS: Driver who killed officer was texting and driving

From last week’s roundup of traffic mayhem in the southeast Valley:

END_OF_DOCUMENT_TOKEN_TO_BE_REPLACED

3/7/2020 ~9:40am. Add this to the list of seriously how often does this happen?. A driver “lost control” and drove up on  the sidewalk, killing a 2-year old who was walking there with his parents. Hayden near Royal Palm Road, Scottsdale.

12news: 2-year-old dies after being struck by car in Scottsdale 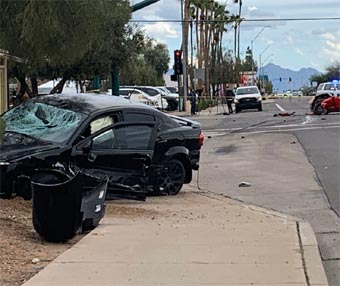 12/26/2019 11:15AM Bell Rd at 35th Ave, Phoenix. The driver of the grey Avenger “was driving west at a high rate of speed and entered the intersection, colliding with the (red) Mustang”, after which he drove up on the sidewalk and killed/injured a bunch of people.  The Mustang driver was attempting to turn left. Police have said they intend to charge the as yet unnamed Avenger driver with manslaughter and aggravated assault. END_OF_DOCUMENT_TOKEN_TO_BE_REPLACED

A woman has been arrested after she killed two pedestrians including a boy and a grown man, stopped briefly, then fled the scene, telling police, because “she thought she hit a dog.” Must have been one big dog.

See something, say something — In this case there was a fairly good vehicle description between witnesses and evidence left at the scene. The news reports that police found the driver via a neighbor’s tip. END_OF_DOCUMENT_TOKEN_TO_BE_REPLACED

4/23/2019 ~ 8:30PM Pedestrian walking along an unmarked crosswalk struck in center of road by a driver who was swerving around other traffic who had stopped in compliance with the law; to allow the pedestrian to cross in the unmarked crosswalk at the intersection of 59th Avenue and McLellan Road. END_OF_DOCUMENT_TOKEN_TO_BE_REPLACED

4/23/2019 ~ 11pm victim Thomas Taraba and another person were walking on the sidewalk along McDowell Road near 37th Street. Police say river 20-year-old Zachary Showers was the driver; he was arrested on suspicion of DUI

“According to court documents, Taraba was thrown 75 feet” indicating the driver’s speed was very fast, perhaps too fast for any city street. 12news.com. a few more details at fox10news.

END_OF_DOCUMENT_TOKEN_TO_BE_REPLACED

Law enforcement officers face significant risk of injury and death from traffic incidents; it’s a serious occupational hazard; The leading cause of death for police are … traffic collisions — not shootings or other attacks, and very few of the collisions involve high-speed chases. Just run-of-the-mill crashes where inattentive or otherwise impaired drivers crash into them. END_OF_DOCUMENT_TOKEN_TO_BE_REPLACED