3/3/2021, morning. Ug. Driver wipes out a family walking on a sidewalk within a Walmart parking lot.

“the driver could face a reckless driving charge”. Don’t count on it. Authorities have already said impairment is not involved, more than likely this will be seen as the usual “just an accident”. END_OF_DOCUMENT_TOKEN_TO_BE_REPLACED

12/17/2020, Thursday night (time not specified; also victim’s name not released). The driver of a Ford F-150 left the road near West Grant & North Oracle crashing thru a fence into a backyard striking and killing a person there, then ran away. Police think the driver may have been drunk.

END_OF_DOCUMENT_TOKEN_TO_BE_REPLACED

6/4/2020 7pm. A hit and run driver drove over the sidewalk and seriously hurt two women who were walking on the sidewalk in Old Town Scottsdale. Injuries are said to be serious, with one “fighting for her life”.

END_OF_DOCUMENT_TOKEN_TO_BE_REPLACED

A dangerous driver failed to negotiate the exit ramp from eastbound I-10 at Warner Road, losing control and killed the signal pole and pedestrian beg button post in August 2017. It was promptly replaced.

Incidentally the signal pole is adjacent to the crosswalk, the drivers also wiped out the pedestrian beg button post — you know, where a pedestrian might be standing?

END_OF_DOCUMENT_TOKEN_TO_BE_REPLACED

For the Ahwatukee archives: April 2019 high speed chase ending in a five-vehicle  crash and ensuing gunbattle; one federal agent’s truck careened over the curb and crashed through a wall.

Not exactly usual traffic but certainly not all that unusual — drivers jumping curbs, smashing lightposts, walls, killing joggers, etc. on a routine basis.

We see now, a year later, the now dead driver was severely impaired by drugs: “Only later, after an autopsy and toxicology report, was it revealed that she had near-fatal levels of methamphetamine in her body, which could have explained much of her [erratic] driving behavior…’The effect of methamphetamine would be related to increased risk-taking behavior, more aggressive behavior, potentially erratic driving,’ said Stripp, a forensic toxicologist … ‘They may speed, they may run red lights.'”

END_OF_DOCUMENT_TOKEN_TO_BE_REPLACED

3 peds were injured with one in extremely critical condition, a second in critical, and the third in serious condition.

Police say a left turning driver of a VW failed to yield caused the driver of an Altima to careen onto the sidewalk, wiping out 3 peds and a bus stop.

12/26/2019 11:15AM Bell Rd at 35th Ave, Phoenix. The driver of the grey Avenger “was driving west at a high rate of speed and entered the intersection, colliding with the (red) Mustang”, after which he drove up on the sidewalk and killed/injured a bunch of people.  The Mustang driver was attempting to turn left. Police have said they intend to charge the as yet unnamed Avenger driver with manslaughter and aggravated assault. END_OF_DOCUMENT_TOKEN_TO_BE_REPLACED

In last week’s (8/30/2019 afternoon) serious crash a pedestrian crossing Broadway was hospitalized after being struck by a driver. Victim-blamers will joyfully point out that the crash occurred “near Hardy Drive outside of the crosswalk”. Jaywalker! Worse yet, the driver — the “other victim” here — is being persecuted for being suspected of DUI. — Driver arrested for DUI after hitting pedestrian in Tempe END_OF_DOCUMENT_TOKEN_TO_BE_REPLACED

6/3/2019 morning peak time. Another* one. This time the NW corner of Ray and 48th St; a high-volume hi-speed arterial intersection. Hopefully no one was killed; but of course that would just be luck — the car drove right over the sidewalk to eliminate the pole.

This is/will cause major traffic disruptions; it’s still blocked a day later and the workmen told me it is likely to take a week to 10 days.(it was ultimately 8 days). The right-hand westbound thru lane on Ray will be blocked until the project is finished; and the Southbound RTO and bike lanes are also blocked. END_OF_DOCUMENT_TOKEN_TO_BE_REPLACED

4/23/2019 ~ 11pm victim Thomas Taraba and another person were walking on the sidewalk along McDowell Road near 37th Street. Police say river 20-year-old Zachary Showers was the driver; he was arrested on suspicion of DUI

“According to court documents, Taraba was thrown 75 feet” indicating the driver’s speed was very fast, perhaps too fast for any city street. 12news.com. a few more details at fox10news.

END_OF_DOCUMENT_TOKEN_TO_BE_REPLACED

This is also very near the spot where another out-of-control driver inexplicably left the loop and drove up on the sidewalk, killing jogger Rene Karlin in 2011.
For more local shenanigans (more out-of-control drivers, killing busstops, light poles, knocking down walls and so forth), click on the ahwatukee tag.

Police think the driver may have been impaired in this 3/12/2019 morning incident. Also, for some reason they are protecting the identity of the suspect. Maybe will be non-traffic? (for now it’s tagged). END_OF_DOCUMENT_TOKEN_TO_BE_REPLACED

No one was hurt only by dumb luck. Seriously, how often does this happen?

There seems to be some disagreement over the exact number of vehicles involved (only 9 or was it 10?)  after the driver losing control and crashing into many other vehicles, in some cases obviously totaled. END_OF_DOCUMENT_TOKEN_TO_BE_REPLACED 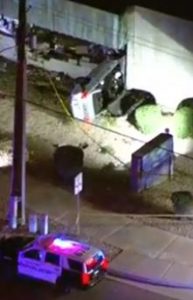 PD: Street racing may have led to driver crashing into Tempe building
TEMPE, AZ (3TV/CBS 5) – A driver has life-threatening injuries after slamming into a building…Police say two drivers were speeding next to each other when one of them spun out and crashed into the building on the corner.

END_OF_DOCUMENT_TOKEN_TO_BE_REPLACED

From the probable cause statement:

The defendant was operating a motor vehicle in the area of 700 E Baseline road where he was traveling eastbound in the westbound lanes of Baseline Road. The def proceeded eastbound through the intersection of 7th street in the westbound curb lane of Baseline Road where he drove up onto the sidewalk along the north side of baseline road  and struck the victim WHO WAS WALKING ON THE SIDEWALK…