12/26/2019 11:15AM Bell Rd at 35th Ave, Phoenix. The driver of the grey Avenger “was driving west at a high rate of speed and entered the intersection, colliding with the (red) Mustang”, after which he drove up on the sidewalk and killed/injured a bunch of people.  The Mustang driver was attempting to turn left. Police have said they intend to charge the as yet unnamed Avenger driver with manslaughter and aggravated assault. END_OF_DOCUMENT_TOKEN_TO_BE_REPLACED

Green means go, right? Even when there’s something really big, with really bright flashing lights. Yet somehow a driver missed all those cues — “The Jeep’s driver told the responding police officer that he didn’t realize the bus was going to stop at the railroad tracks and kept driving because there was a green light”. END_OF_DOCUMENT_TOKEN_TO_BE_REPLACED

Authorities have finally located and arrested suspect in the 2006 DUI death of Jason Wedo.

END_OF_DOCUMENT_TOKEN_TO_BE_REPLACED 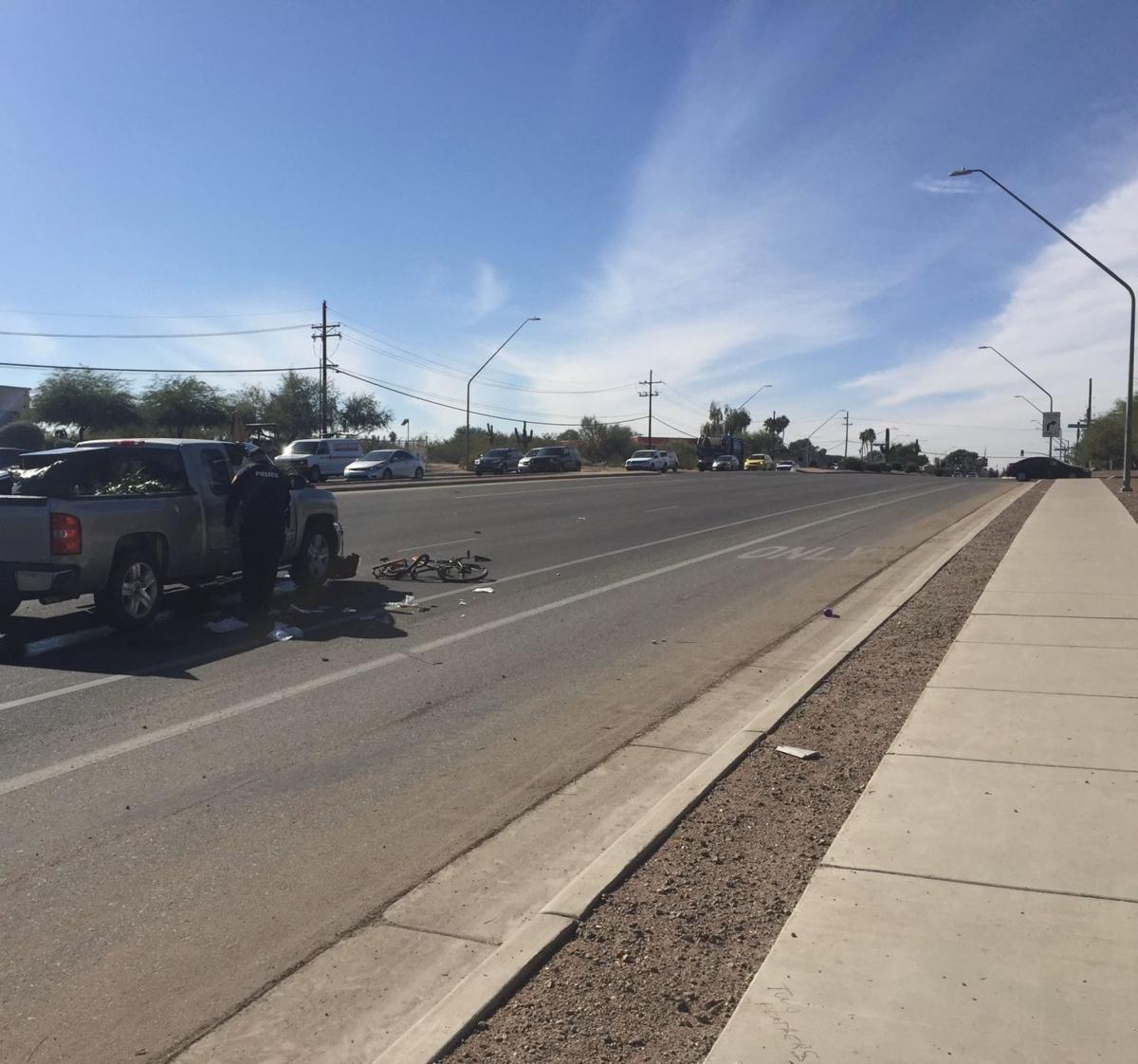 END_OF_DOCUMENT_TOKEN_TO_BE_REPLACED

HIT AND RUN BE ON THE LOOKOUT: suspect vehicle: dark-colored pickup truck similar in style to a Ford Ranger. See something say something; a sharp eyed neighbor enabled police to make arrest in ped-fatal hit/run in Chandler a few weeks ago.

END_OF_DOCUMENT_TOKEN_TO_BE_REPLACED

Something is rotten in Pima County. It seems to me cases with very similar fact-sets (extreme speed and recklessness, DUI, causing headon) routinely go for manslaughter elsewhere. END_OF_DOCUMENT_TOKEN_TO_BE_REPLACED

END_OF_DOCUMENT_TOKEN_TO_BE_REPLACED

10/7/2019 6:42PM (sunset was 6:04, so mostly darkness). Sierra Vista police report that a 53 y.o. female bicyclist was killed crossing SR92 against the light, according to witnesses, at Kachina Trail.

END_OF_DOCUMENT_TOKEN_TO_BE_REPLACED

A woman has been arrested after she killed two pedestrians including a boy and a grown man, stopped briefly, then fled the scene, telling police, because “she thought she hit a dog.” Must have been one big dog.

See something, say something — In this case there was a fairly good vehicle description between witnesses and evidence left at the scene. The news reports that police found the driver via a neighbor’s tip. END_OF_DOCUMENT_TOKEN_TO_BE_REPLACED

9/24/2019 ~ 6PM Gilbert Police said a 15 y.o. girl was seriously injured while crossing Greenfield Road after being struck by a southbound(not sure?) driver. She died the next morning.

This is at the trail crossing of Greenfield Road and the Western Power Line / Sun Circle Trail. The crossing there, unlike many of the others further west, has no signal or markings. END_OF_DOCUMENT_TOKEN_TO_BE_REPLACED

Goodyear police are investigating a 9/12/2019 crash that occurred around 6:30 involving 3 cyclists transported with injuries, and a fourth who was not transported. The news-chopper footage shows a black sedan, as well as a large number of additional cyclists who were presumably riding together in a group but were not directly involved in the crash. 12news.com azcentral END_OF_DOCUMENT_TOKEN_TO_BE_REPLACED

In last week’s (8/30/2019 afternoon) serious crash a pedestrian crossing Broadway was hospitalized after being struck by a driver. Victim-blamers will joyfully point out that the crash occurred “near Hardy Drive outside of the crosswalk”. Jaywalker! Worse yet, the driver — the “other victim” here — is being persecuted for being suspected of DUI. — Driver arrested for DUI after hitting pedestrian in Tempe END_OF_DOCUMENT_TOKEN_TO_BE_REPLACED

Aug 20, 2019 ~ 8PM. The crash occurred near the intersection of East Frontage Road and North Starlight Drive, Prescott Valley. There were no details on the manner of collision.

Hit and run, bicyclist suffered serious injuries and died several days later on Aug 26. The suspect driver was book on suspicion of aggravated assault, etc.; hinting the police believe the driver was impaired and caused the crash. Now that the victim has died, charges would presumably be upgraded to a homicide.

END_OF_DOCUMENT_TOKEN_TO_BE_REPLACED

ADOT has released Crash Facts 2018 in the later part of June (of 2019), as usual; this year and I did not order CDs but rather accessed the raw data online sometime in July (it will in relatively rare cases be updated after this).

The graphical crash map has been NOT updated and so continues to have years 2009-2017 ; the tool used to present the map, Google fusion tables, is being discontinued end of 2019, and I need to find a replacement.

The Fatality Grid has been reconciled and contains some specifics on every bicyclist fatality in Arizona from 2009-2018, and ongoing as discovered.