From last week’s roundup of traffic mayhem in the southeast Valley:

END_OF_DOCUMENT_TOKEN_TO_BE_REPLACED

A 31 year old man has become the first traffic fatality on the new section of freeway that opened  in late December, just a couple of weeks ago. DPS reports that 31-year-old Josafath Rubio-Hernandez died while driving the wrong way on the freeway near Elliot Road and collided head-on with a semi-truck.

Police said they are still investigating if the driver was impaired. Most wrong-way drivers involved in fatal collisions are impaired (thought to be around 75%)

END_OF_DOCUMENT_TOKEN_TO_BE_REPLACED 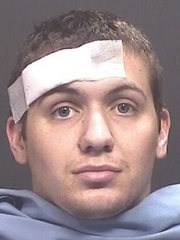 Something is rotten in Pima County. It seems to me cases with very similar fact-sets (extreme speed and recklessness, DUI, causing headon) routinely go for manslaughter elsewhere. END_OF_DOCUMENT_TOKEN_TO_BE_REPLACED

END_OF_DOCUMENT_TOKEN_TO_BE_REPLACED

DUI has a new aggravation — wrong way driving — as of 2018. Presumably added in the recent years as wrong-way driving, which is almost always associated with impairment, seems to have become more common. (NTSB says official — FARS —  stats are only 50%, however because of non-testing all drivers, the actual figure is “as high as” 75%)

This popped up in the news a few days ago; when police say driver Charles Tack was DUI, driving the wrong way, and involved in a (non-injury) collision on the Loop 202 freeway near I-10. END_OF_DOCUMENT_TOKEN_TO_BE_REPLACED

DUI drivers remain a serious threat to every road user, whether you walk, or  jog, or  ride a bike or ride a motorcycle, or drive a  car. SSTI recently published a good review of related research on the occasion of Utah being the first US state to lower per se limit to 0.05 BAC.

The latest gem is a driver who initially came to the attention of police when they  “began receiving calls reporting a reckless driver in a Nissan Rogue traveling on the sidewalk and nearly striking several vehicles along Milton Road in Flagstaff.” Police stopped the vehicle but the driver fled, ending up going wrong way on I-40. This is on a Saturday (11/17/2018) afternoon around 3:30pm.  END_OF_DOCUMENT_TOKEN_TO_BE_REPLACED

On Friday afternoon police identified the suspect as 20-year-old Yanibra Moreno saying she’s being held on susp of 2nd degree murder and leaving the scene.

END_OF_DOCUMENT_TOKEN_TO_BE_REPLACED

There have been a couple of particularly violent & deadly head-on crashes on state routes recently. In both cases, there was no immediate speculation or cause of why the drivers crossed over and drove the wrong way.

In an Aug 30, 2018 incident occurred on a Thursday afternoon when the 47 y.o. male driver of a Ford SUV crossed over and collided head-on with a Suburban. Both drivers were killed as well as a toddler who was a passenger in the suburban. END_OF_DOCUMENT_TOKEN_TO_BE_REPLACED

A driver veered for unknown reasons causing a massive collision leaving that driver dead, and sending several to the hospital. This is on a “local” street, Roeser Rd east of 32nd St, adjacent to a nice park. “Officers are investigating whether speed or impairment were a factor in the crash” abc15 END_OF_DOCUMENT_TOKEN_TO_BE_REPLACED

“…DPS arrested 52 people suspected of driving the wrong way… Ultimately, each of the 52 drivers arrested was found to be impaired”.

So, 100% of wrong-way drivers were impaired. Wrong way driving appears to be an impaired driver problem. END_OF_DOCUMENT_TOKEN_TO_BE_REPLACED

This past Wednesday (6/28/2017) afternoon, another wrong way fatal crash and another driver is locked up. “Fixing” wrong way driving can most obviously be effected by removing impaired drivers from the road. Proposed, costly, technological gadgets to detect wrong-way can have only limited usefulness. Abc15.com reports that the wrong-way driver “… admitted to drinking before driving and blood tests came back with a blood alcohol level of .160”

END_OF_DOCUMENT_TOKEN_TO_BE_REPLACED

Some recent news items. Also, be sure to check out the “cold medicine” guy from a few days ago…

6/6/2017 double-fatality ~8PM, began driving around airport, including through parking structures the wrong way and breaking through the arm/gate: Wrong way driver 56-year-old Ronald Wayne Mollenhauer killed another driver, Young Lee on  a transition ramp between I-10 and SR51. A third driver was injured. Given the ww driver is dead, you probably won’t hear much about this again. Was he impaired by drugs or alcohol, or some other impairment? Most ww drivers are. We’ll have to wait for FARS to find out which will report any chemical testing results. END_OF_DOCUMENT_TOKEN_TO_BE_REPLACED

A total of 13 people requested victim’s rights due to the driver using his vehicle as a deadly instrument… During Walker’s initial appearance, one of the alleged victims addressed the judge.
“We were inches from actually crashing into him, and that in itself is an emotional trauma,” the man said. “He’s not safe and he shouldn’t be out in society placing others in danger.”

It’s good to see ordinary people stick up for their rights and hopefully hold dangerous drivers responsible for their actions.

Despite all the hoopla surrounding wrong-way crashes “Wrong-way collisions are not a new phenomenon and statistically remain unchanged year over year in Arizona.”, nevertheless Gov Ducey wants action. It’s nice to focus attention on traffic safety but perhaps attention could be better focused on the vast majority of traffic fatalities and injuries that don’t involve a wrong-way driver? END_OF_DOCUMENT_TOKEN_TO_BE_REPLACED

4/14/2017 ~ 2am. A male wrong-way driver collided headon on the I-17 freeway near Greenway in Phoenix with a vehicle carrying two sisters. All are dead.

The wrong way driver had been traveling for (at least) several miles the wrong way. END_OF_DOCUMENT_TOKEN_TO_BE_REPLACED

In a longish piece in AZ Republic Live or die on Phoenix-area freeways: It’s your choice (the print edition was headlined 3-year freeway fatality toll: 207) about (specifically metro-Phoenix area. I think they looked at just Maricopa County) freeway traffic fatalities, it was revealed the fatality rate was 61% higher than national averages, per mile driven. I’m not sure exactly what’s counted; it apparently counts only that part of the state highway system that is fully controlled-access, a.k.a. freeways, and in Maricopa county for the purposes of this series of articles.

Things you won’t hear people say: “I would never get in a car… Drivers are just too dangerous” END_OF_DOCUMENT_TOKEN_TO_BE_REPLACED