— some vehicles are “slow by nature” (e.g. buses, heavy equipment, or most commonly a heavily loaded truck; especially up a grade, etc). Police seem to have no trouble understanding this is not an impeding violation…

§28-704(C), A person “driving a vehicle at a speed less than the normal flow of traffic … on a two-lane highway” must give way when more than five others are impeded, but only when safe to do so. [This rarely applies anywhere in a metro area]

Bicyclists and Far to the Right

Bicyclists are subject to 28-704C, same as motorists — this rarely applies in metro areas; because roads with significant traffic tend to have more than two lanes.

Bicyclists traveling at a reasonable speed (for a bicycle) are not subject to the impeding rule, 28-704A (for two reasons); they are, however subject to being required to ride as far right as practicable 28-815A but only under certain conditions and ONLY WHEN SAFE; This is NOT a safety rule, it is a motorist convenience rule which allows passing of slower bicyclists by faster motorists.

Safety advice from experts: when the lane is narrow, to ride near the center of the lane. Where to ride on the road…

When can you “take the lane”, legally? How narrow is narrow? links to cyclingsavvy reference page.

Since arterial roads throughout the metro region are virtually all narrow-laned, around 10 to 12 feet [see album of typical Tempe arterials w/measurements]; the effect of the exception is that bicyclists cannot be in violation of 28-815A (“FTR”) virtually anywhere on arterial roads. Their position anywhere within the lane is legal, and as mentioned above, a position near the center, or just left of center is safest.

Bicyclists are subject to 28-721B whenever the more-specific rule (FTR / 28-815A) doesn’t apply; typically because of a narrow lane. Bicyclists going slower than the normal speed of traffic (unless turning) must use the right lane (the “slow” lane) while faster traffic uses lanes to the left.

When bike lanes (designated; not edge lines, shoulders, etc) are provided, bicyclists will tend to use them, even though Arizona has no mandatory use rule, neither for bike lanes, or for shoulders.

Bike lanes, even when provided, often become impassible for a variety of reasons. Commonly: construction and landscape maintenance. When a bike lane is obstructed or otherwise cannot be used, the bicyclist will merge out of the BL into the adjacent travel lane when safe, and continue along using the general purpose travel lane.

First come, first served; motorists wishing to go faster must pass following the usual procedures (in the same lane if the lane is wide, or change into another lane if narrow)

One other common misunderstanding of FTR law

Bicyclists should always Ride With Traffic, because wrong-way riding is very dangerous. It is, however, either extremely unlikely, or impossible to be a 28-815A violation.

Bicyclists traveling in the roadway must, like drivers, use only the right-half of any two way street. If they fail to do so it is a violation of §28-721.

Bicyclists traveling the wrong way on a sidewalk are not in violation of 28-815A, or any other state law (though local laws may apply; only Tempe and Yuma have such laws). Much more about sidewalks here.

Listing of each Bicyclist Fatality Occurring in Tempe Since 2009

In any event, consistent with other urban areas, strike-from-behind tends to be rare. Of the eight total fatalities in twelve years (2009-2020) there has been at most one; the Jan 2019 incident was arguably a strike from behind, but not classic since it involved a bicyclist changing lanes)

Typical of multi-lane arterials; Curb lane is 10′ measured from center of lane dividing line to gutter seam. Gutter is 16″. There are also periodic drainage grates that protrude out past the usual gutter seam, the one pictured here is 28″ from curbface; narrowing the usable width in the curb lane to about 9′. 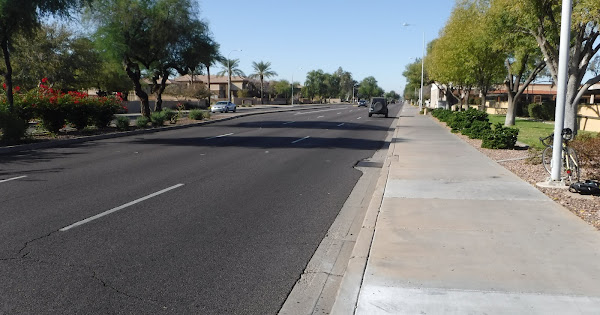