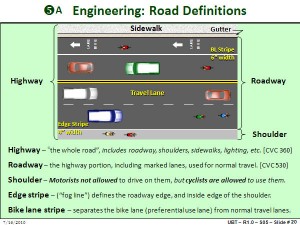 [ For where and how traffic laws in Arizona apply to bicyclists, see this article ]

The rules of the road (ROR) apply to motorists when an a road; but what about when driving in a parking lot? A private street? etc?

What are usually referred to as the ROR, like stopping, right-of-way, signals, etc, are contained in Arizona Revised Statutes, Title 28, Chapters 3. (Chapter 4 is impaired driving and is treated specifically below). Here is the key statute, along with the key definition,  emphasis added in italics:

§28-621. Applicability to vehicles on highways; exceptions

The provisions of this chapter [chapter 3, the ROR] and chapter 5 [penalties] of this title [title 28, Transportation] relating to the operation of vehicles refer exclusively to the operation of vehicles on highways except:
1. If a different place is specifically provided by statute.
2. Article 4 [hit-and-run] of this chapter and section 28-693 [reckless driving] apply on highways and elsewhere throughout this state.

§28-101, 57. “Street” or “highway” means the entire width between the boundary lines of every way if a part of the way is open to the use of the public for purposes of vehicular travel.

So the key definition being highway (synonymous with street), and encompasses the entire width; including the roadway where vehicles normally driven, any shoulders, any parking, and even any sidewalks. It also would appear from the definition of highway that it’s immaterial whether or not the land is “private property”.

The exceptions are pretty obvious: hit-and-run, as well as reckless driving apply not just when driving on roads, but  “…and elsewhere”; which means everywhere and anywhere.

I don’t know of any laws that fall into the #1 exception, where the statute explicitly states where a law might apply elsewhere. ?

Where the ROR don’t apply, run-of-the-mill traffic violations can’t be imposed: so disregarding signs, signals, speed limits, etc cannot be cited. The behavior would have to rise to the level of reckless driving in order to be charged.

None of that has anything to do with civil liability in the event of a collision; just that those laws can’t be cited against a driver.

When a crash occurs involving a motor vehicle, this all ties in to whether or not crashes (and therefore injuries and fatalities) get reported via trackable means, an Arizona Crash Report; or become non-traffic incidents and not counted towards officially reported traffic statistics (i.e. in Arizona by ADOT, or federally by NHTSA)

DUI; Driving Under the Influence

DUI has its own applicability for the chapter (chapter 4 of Title 28), though it’s worded identically to the hit-and-run and reckless driving exceptions in the Title, “highways and elsewhere“;

§28-1302. Applicability of chapter
This chapter applies on highways and elsewhere in this state.

11 thoughts on “Where do traffic laws apply?”