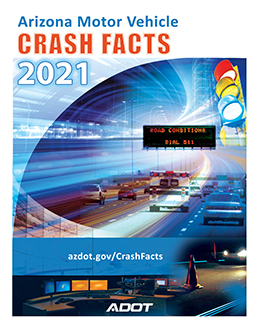 ADOT released Crash Facts 2021  in late September 2022 (a bit later than usual? and oddly, the database was missing a lot as recently as end of June; what is causing these huge delays? are police sitting on reports?

2021 was a very bloody year on Arizona’s roads and highways. 2020 had unusual traffic patterns due to pandemic [1], but comparing 2019 to 2021  deaths were up sharply for all person types (driver, passenger, bicyclists, pedestrian), about 20% overall.

Just a reminder, there has been a sharp decrease in the total number of Bike-MV crashes beginning around 2015 [2]; that trend is continuing; e.g. comparing 2021 to 2019 (exclude 2020 due to uncertainty around pandemic-era reporting [1]), shows the number dropped once again,  with the exception of fatalities, which rose sharply to historic highs. (of course, reporting non-fatals is in some sense discretionary, leading one to wonder what’s going on).

Here’s a historical view of injuries and deaths for all person types:

The Bicyclist Fatality Grid has been reconciled and contains some specifics on every bicyclist fatality in Arizona from 2009-2021, and ongoing as discovered. The two that were added after a VERY LONG DELAY of nearly a year are both vague and suspicious and poorly or oddly coded (“Walking with traffic”, on the “sidewalk” would be a ped, not a bicyclist). (they’re marked in magenta on the grid), E.g. one of them claims to not be a hit and run, but the data is all unknown, including the driver’s gender and age, implying hit-and-run. (see tag “missing” hit and runs)

[2] For a long, excruciatingly boring details with city-by-city breakdowns showing the decline of reported Bike-MV crashes that began around 2015 see: number-and-severity-of-arizona-bike-mv-crashes/